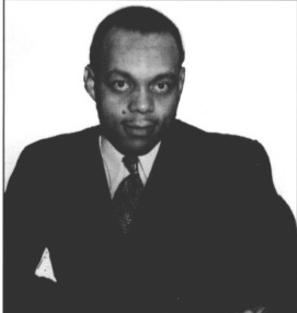 BUNKLEY, CRAWFORD BERNARD, JR. (1921–1974). C. B. Bunkley, Jr., African-American Dallas attorney and civil rights activist, was born in Denison, Texas, on July 21, 1921, to Crawford B., Sr., and Ruth (Smith) Bunkley. He attended Denison Public schools and completed his secondary education in 1937. In 1941 Bunkley received his B. A. in political science from Prairie View A&M College, and he earned a law degree from the University of Michigan in 1944. Bunkley came to Dallas in March 1944 and began work at the law office of William J. Durham where he obtained his license to practice law in the state of Texas.

Bunkley, a member of the National Association for the Advancement of Colored People (NAACP), served as legal counsel in many of their civil rights suits. Most notably, Bunkley, sponsored by the NAACP along with Thurgood Marshall and William J. Durham, represented Heman M. Sweatt in the landmark United States Supreme Court case of Sweatt v. Painter (1950). Bunkley was also involved in the Supreme Court case of Borders v. Rippy (1955), the first Dallas school desegregation case that sought to admit blacks into the public schools. Additionally, he served as legal counsel in the State of Texas v. A. Maceo Smith and U. Simpson Tate (1956), an attempt to expel the NAACP from Texas. He was also counsel in the Perry Fields murder case and the Lawrence Addley rape case.

Bunkley was a member of the State Bar Association, the Dallas-Fort Worth Black Lawyers Association, Omega Psi Phi fraternity, and the court-appointed Tri-Ethnic Committee. He was one of the founders of the J. L. Turner Legal Society of Dallas. He served as president of the Dallas Negro Chamber of Commerce (now Dallas Black Chamber of Commerce) in 1952; as a member of the board of directors of the South Dallas YMCA; as district chairman of Circle Ten Council, Boy Scouts of America; as branch manager of the South Dallas Hexter-Fair Title company; on the board of directors of Guaranty Bank; and grand attorney for the Texas chapter of the Knights of Pythias. Bunkley ran unsuccessfully for the Dallas City Council in 1959 and 1965.