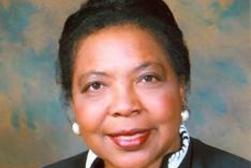 Chief Justice Carolyn Wright was appointed to the position of Chief Justice, 5th District Court of Appeals for the State of Texas, by Governor Rick Perry on November 17, 2009. Chief Justice Wright leads the largest intermediate court in Texas and one of the busiest courts in the nation, with thirteen justices serving six Texas counties. She has authored thousands of legal opinions in cases involving legal issues in every area of Texas law.

Chief Justice Wright's service as a judge spans over 30 years. She was in the first round of judicial appointees by Governor George W. Bush in his first term of office in 1995. Before her appointment, Judge Wright served as a State District Judge, a Dallas County Associate Judge, and a practicing attorney. She has a broad range of experience in the areas of civil, family, juvenile, and criminal law, as well as mediation. As a trial court judge, she was a forerunner in the state in designing creative solutions and innovative programs to reduce the impact of domestic violence and nonsupport on families and children.

Outside of her commitments to the court, Chief Wright is tireless in her efforts to improve the Texas judicial system. She has actively participated as a member of the faculty or served as a panelist, speaker, mentor, and leader in many judicial, legal, and professional organizations, including the American, National, and Dallas Bar Associations, the National Judicial College, and the Texas Bar Foundation. She is also a Rotarian and Paul Harris Fellow, an active member of her church, and a member of the Executive Women of Dallas, the Links, Inc., and the Summit.

Chief Justice Wright has been recognized by a long list of distinguished organizations. She is a recent inductee into the Texas Women's Hall of Fame and Governor Bush presented her with the Yellow Rose of Texas Award for significant contributions to her community. Other awards include the National Association of Women Lawyers' Leadership Award and the American Bar Association Business Section's Award for contributions to women and proficiency in law.

A fourth-generation Texan born in Houston, reared in a career military family, Wright has lived throughout the United States and Japan. She graduated from the Howard University School of Law in Washington, D.C., where she received the Distinguished Alumni Award. She is married to James Sanders.