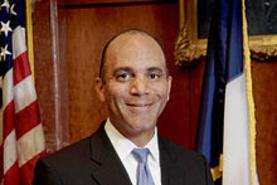 Jefferson was first appointed to the court on April 18, 2001, to fill the vacancy left by Alberto R. Gonzales, who resigned to become White House Counsel to President George W. Bush. Jefferson was then elected to that seat in 2002 with 56 percent of the vote. Before Jefferson could complete his new term, however, he was again promoted by Perry. On September 20, 2004, Perry appointed Jefferson the successor to Chief Justice Thomas R. Phillips, who had resigned from the Court a few weeks earlier after nearly seventeen years as chief justice. Jefferson was elected in November 2006 to serve out the remainder of Phillips's unexpired term as Chief Justice in November 2006.