Judge L. Clifford Davis was born in Wilton, Arkansas (Red River County) in 1924. Since there were no Black high schools in Red River County, he moved to Little Rock with his older siblings to attend school at Dunbar High School. After graduating in 1945, Judge Davis wanted to be a train engineer until he saw the home of noted attorney, Scipio A. Jones. This inspired him to become a lawyer. However, Arkansas, at the time, did not have a college that accepted Blacks in the School of Law/Jurist Doctorate Program. Nevertheless, he applied to the University of Arkansas Law School. During this time, Arkansas had a program that offered out of state aid and would pay tuition for Black students to go out of state to pursue a degree that was not offered at any school in the state that admitted Blacks. Not expecting to be admitted in Arkansas, Davis applied and was accepted at Howard University Law School in Washington, D.C. in 1946. Much to his surprise in the fall of 1947, Davis received a letter from the U of A accepting him in their program as the first Black law student. On January 30, 1948, the University of Arkansas President announced the acceptance of Davis. Although he accepted, he was told that he would have to follow certain guidelines to attend, thus he decided to remain at Howard, graduating in 1949.

A pioneering civil rights lawyer and former state judge, Davis has plenty of accomplishments to be proud of. After graduating from Howard University School of Law in 1949, Davis practiced civil rights law in Pine Bluff, Arkansas, where he says he was one of nine Black lawyers in the entire state. However he saw a greater need for his services in Texas, where racial segregation was more prevalent. He became licensed in Texas in 1953, and in 1954, a young and single Davis moved to Fort Worth, where he was one of only two Black lawyers in the city. In 1956 he filed Jackson, et al. v. Rawdon in the U.S. District Court in Dallas, a suit that resulted in the desegregation of the Mansfield Independent School District. In 1959, Davis filed Flax, et al. v. Potts, another federal civil rights suit, which led to the desegregation of the Fort Worth Independent School District. In the 1960s he became on of the first Black lawyers to join the Tarrant County Bar Association and in 1983, he ascended to the Texas district court bench, becoming one of the first Black state district judges in Tarrant County, where he served on the bench until 1988.

Judge Davis has received numerous awards from other social organizations. He was recognized by his peers in 1997 when he received the Tarrant County Bar Association?s highest award, the “Silver Gavel Award” and was inducted into the National Bar Association Hall of Fame. He was also recognized by the NAACP and awarded the “William Robert Ming Award” for his efforts with their legal affairs. He and his wife of over 50 years, Ethel, have two daughters; Avis and Karen. 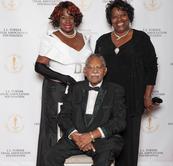