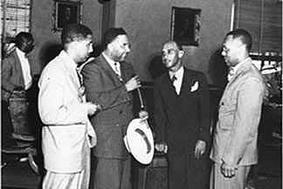 DURHAM, WILLIAM J. (1896–1970). William J. Durham, black civil-rights activist and attorney, was born on a farm near Sulphur Springs, Hopkins County, Texas, in 1896. After completing one semester at Emporia State College in Kansas, he served in the United States Army in France during World War I, after which he studied law in the office of Ben F. Gafford, a white attorney in Sherman, Texas. After passing the bar examination in 1926, Durham established his practice in Sherman and began taking on civil-rights cases, even though in the Sherman riot of 1930 a lynch mob burned the black business district, including Durham's office. Though such lawsuits were rarely profitable, Durham had a lucrative practice as legal counsel to an insurance company and could therefore spend part of his time fighting for equal rights.

By 1940 he was recognized as the leading black lawyer in Texas. Gasoline shortages during World War II and his growing business ties and activities in the National Association for the Advancement of Colored People in Dallas gave Durham enough reason to move in 1943 from Sherman to Dallas, where he became known not only as a civil-rights champion and the most effective black leader of the NAACP, but also for his effectiveness in court and pretrial strategy. He took part in more than forty civil-rights cases involving such causes as school integration, voting rights, and equalization of teachers' salaries.

His most famous case was Sweatt v. Painter (1950) which resulted in the integration of the University of Texas School of Law. Durham and Thurgood Marshall worked closely in crafting this case from quarters in the Durham family home in Sherman.  Durham knew that there was no law school for African Americans in the state at that time and that UT would consequently be particularly vulnerable to a lawsuit if the school rejected Sweatt on the basis of race. Durham became best known for the school-integration cases in which he and his associates went to court to implement the 1954 Supreme Court rulings. Additionally, Durham was on the national board of the NAACP and assisted in directing its education and legal-defense fund. He also helped organize the Texas Council of Voters.

After living in Dallas and practicing law there for twenty-seven years, Durham died, on December 22, 1970. He was buried in Greenville Cemetery in Greenville, Hunt County. He was a trustee of Good Street Baptist Church.